Our mission is to provide a platform for all residents in Towns County to address issues and problems of mutual interest which affect the management, planning and development of the county and its environs.Towns County Civic Association Board

There is one General Membership Meeting in June each year.

The Board of Directors of the Towns County Civic Association meets on the second Wednesday of each month at 2 p.m.  Members and the public are welcome to attend.

A Membership Appreciation Dinner is planned on January 19, 2023, 6:00 p.m., at the Towns County Civic Center next to the courthouse.

The theme of this event will be the History of Towns County Past, Present and Future.

As always, everyone is welcome to attend whether members or not.
TCCA will supply a variety of meats and other snacks but please bring a
covered dish to share with everyone.

The most recent General Membership Meeting was conducted on June 16, 2022 at Town County Historical Society building:

President John Clemens opened the meeting at 6:00 p.m. and welcomed the 45 members and guests attending.  He then recognized the Board members and make brief remarks about the purpose and activities of the association.
Treasurer Larry Dietsch reported a balance of $3,330.
Membership Chair Anna Denton reported 122 individual members, 68 households, 8 HOA’s.
Following the pledge of allegiance and an invocation those present enjoyed a covered dish meal with meat and drinks provided by the Board.

The first speaker was Laura Morrissey, who spoke on the subject of Crypto Currencies and the impact of Crypto Mining on neighborhoods, electric utilities and wildlife.

The next topic was addressing growth concerns in Towns County.  Mayor Liz Ordiales talked about the progress that the City of Hiawassee has made toward reducing debt, becoming more efficient, and preparing the infrastructure to handle the growth in demand for essential services like water, sewer, and roads.  Denise McKay spoke on behalf of Mayor Andrea Gibby about preparations being made by the City of Young Harris, after which Sole Commission Cliff Bradshaw discussed the present and future plans for managing the anticipated growth countywide.

Denise McKay, Director of Economic Development for Towns County, followed up with a detailed descrition of the planning mechanisms in place to direct and control the impact of new residents and tourists coming to our area.

The last order of business was election of officers and board members for the year 2022-2023.  Larry Dietsch, chairman of the nominating committee, offered a list of the current office holders for re-election.  The floor was open for other nominations, but none were received.  By vote of the members present the officers and board member were re-elected unanimously and the meeting ended.

Several recent requested improvements include sidewalk repairs in front of the hospital; a lighted crosswalk sign for the Post Office, and personnel salary justifications. 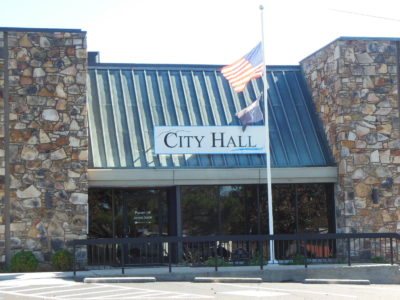 TCCA board members attend City of Young Harris meetings to remain abreast of issues that concern both city and county residents.

Young Harris College, a centerpiece of the city, is a baccalaureate and master's degree granting, private institution that brings nearly 1,400 student residents to Towns County annually. 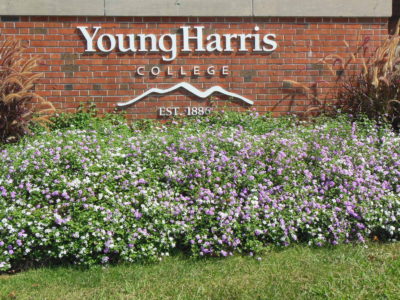 TCCA board members attend monthly meetings of the Towns County Water and Sewer Authority, urging improvement of infrastructure and organization for better delivery of water to neighborhoods. Optimum standards would decrease insurance premiums paid by homeowners and allow firefighters to save structures.

Thoughts concerning the relevance of preserving the County as the environment which many came to live here for.

There are a significant number of County residents that have relocated here to get away from the highly populated areas that contain many facets of the big city life. The sight of a mountain community free of major traffic, a high crime rate, large shopping malls, traffic lights at each road crossing, noise, and yes, the visual pollution of excessive advertising road and billboard signs.  Towns County has now taken steps to better control the spread of large signs, particularly of off-premises billboards, via the county sign ordinance.

Operation Clean Sweep is a project we support year after year. The transfer station requires that trucks cover their load and could issue a fine up to $1000 for noncompliance. 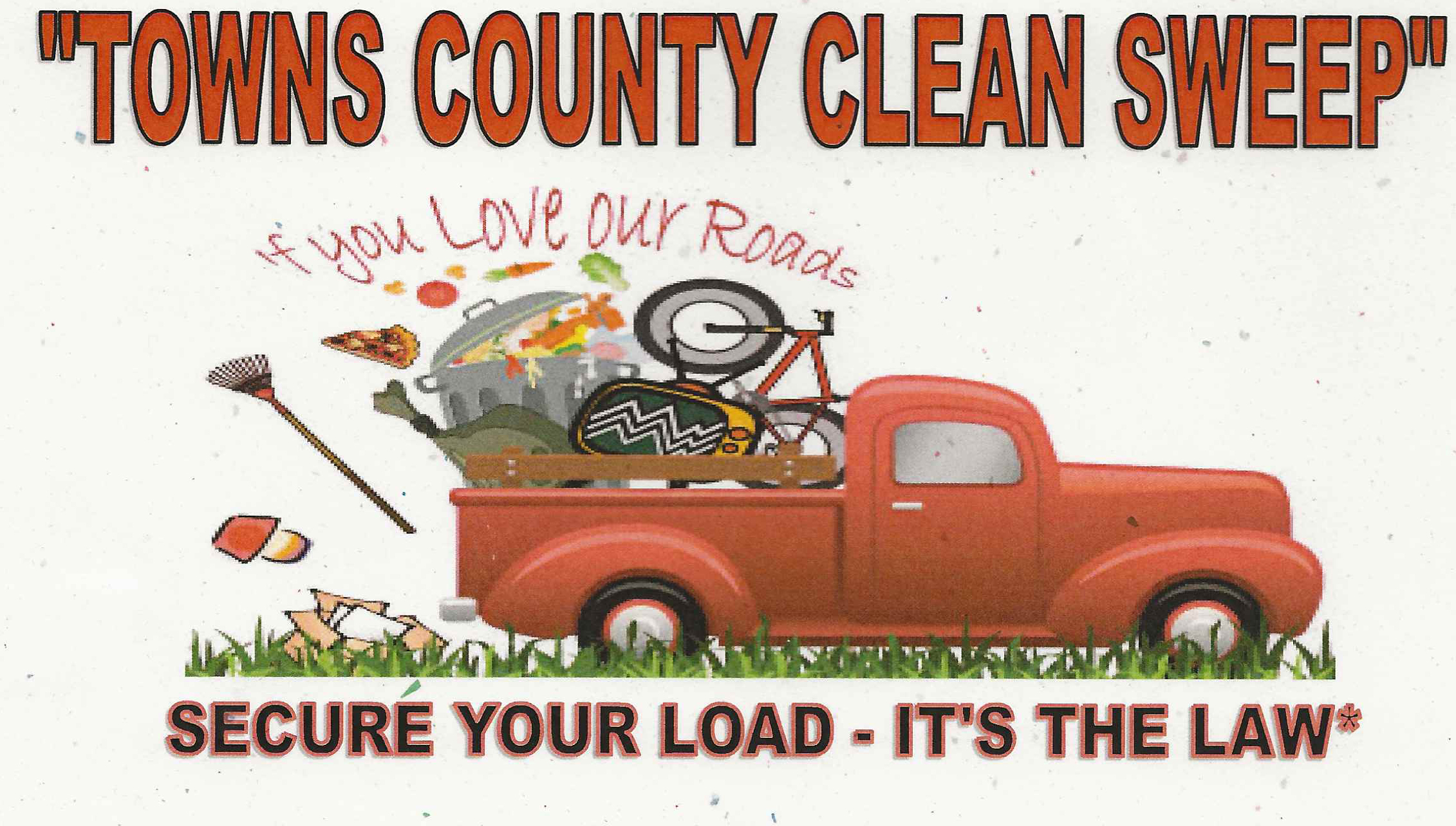 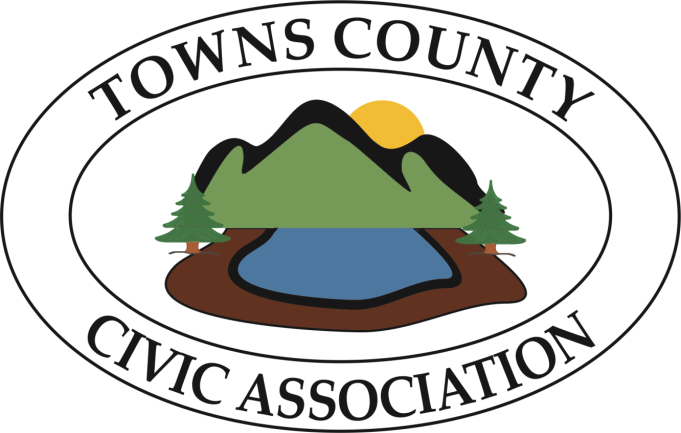 Become a member of the Towns County Civic Association by clicking on the Membership Form link, then printing and mailing the form to our PO Box.  Your participation in our work on behalf of the local community would be greatly appreciated.

YOU STAY INFORMED WHEN YOU ATTEND COMMUNITY MEETINGS.

Some are listed below. Other community meetings are posted weekly in the TC Herald. Many have been temporarily suspended due to the Covid.

Links about the area you might wish to peruse... 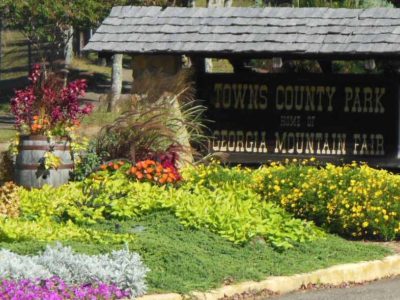 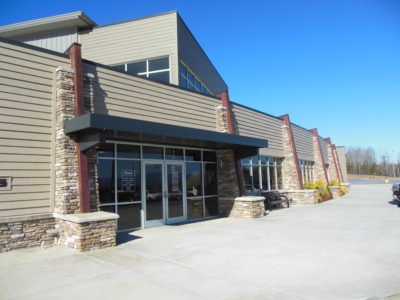 WE SUPPORT THE COUNTY

WE HAVE DONATED FUNDS TO NONPROFIT ORGANIZATIONS

WE SPREAD THE WORD